North Sikkim plateau – The army’s defences on the China border will get a significant offensive boost with the impending deployment of two tank brigades, one each in Ladakh and north-east India. This is the first time that Indian will deploy armoured formations on the China border. Such structures, equipped with main battle tanks and BMP-II infantry combat vehicles, are traditionally used for striking into enemy territory. 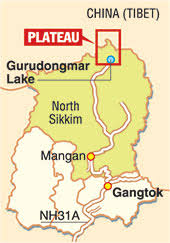 Authoritative MoD sources tell Business Standard that the plan, which has been cleared by the MoD, involves raising six new armoured regiments, equipped with 348 tanks (58 tanks per regiment, including reserves). Also, three mechanised infantry battalions will be raised, amounting to about 180 BMP-IIs.
The decision to deploy tanks to beef up India’s light, mountain infantry divisions was taken due to doctrinal changes in China’s People’s Liberation Army. The PLA has deployed armoured and motorised formations in both their military regions across the Line of Actual Control (LAC), as the de facto Sino-Indian border is called. According to the International Institute of Strategic Studies (IISS), Lanzhou Military Region, which faces Ladakh, has 220,000 PLA troops, including an armoured division and two motorised infantry divisions (a division has three brigades). The Chengdu Military Region, opposite India’s north-eastern states, has some 180,000 PLA troops, including two armoured brigades and four motorised infantry divisions.

Now the Ladakh-based 14 Corps will be allocated an armoured brigade to cover the low approaches from Tibet towards India’s crucial defences at Chushul. In the Sino-Indian war of 1962, six old AMX-13 tanks that the Indian Army had airlifted to Chushul inflicted severe losses and delayed on the advancing Chinese.
The second armoured brigade will be located in the Siliguri corridor in Bengal, covering the approaches from Sikkim to the plains. One regiment will be located on the flat, 17,000-feet-high the North Sikkim plateau, on which border areas are hotly disputed between China and India.
According to MoD sources, the army has demanded the purchase of additional T-90 tanks for these six armoured regiments. India has already bought 657 T-90S tanks from Russia and obtained a licence to build another 1000. Now, in addition to these purchases, the army wants the latest version of this tank, called the T-90MS.
11th edition of Aero India , which All You Need to Know About it – Loganspace
As first reported in Business Standard, India is also raising a mountain strike corps in the northeast, consisting of two mountain divisions with about 40,000 soldiers. The addition of an armoured brigade would add real teeth to the strike corps.
The army demanded such a capability because China’s infrastructure build-up in Tibet allows it to rapidly concentrate forces in a sector, overwhelming the Indian defenders there. If China manages to capture a chunk of territory, India will no longer be forced into bloody, Kargil-style, counterattacks to recapture it. Instead, an Indian strike corps could launch an offensive in an area of its choosing, capturing Chinese territory.
The northeast has already seen a vastly strengthened Indian Air Force. Sukhoi-30MKI fighters are already flying from new IAF air bases in Tezpur and Chhabua, with additional air bases coming up in Jorhat, Guwahati, Mohanbari, Bagdogra and Hashimara. Six squadrons of the indigenous anti-aircraft Akash missile will soon defend north-eastern airspace. And the IAF is modernising eight Advanced Landing Grounds (ALGs), which would support offensive operations in the sector.

What is the equipment given to a sniper in Indian army?

Drone command center set up made on U.S. aircraft carrier !!!