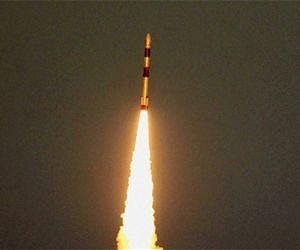 India’s Mars Orbiter Mission was nine million km away from the red planet and is expected to reach it in 33 days, Indian Space Research Organization (ISRO) said Saturday.
“Mars Orbiter Mission (MOM) is just nine million km away from Mars and 189 million km away from the Earth. 33 more days to MARS, ” ISRO said in its social networking site.
Early this month, ISRO scientists also ruled out Trajectory Correction Manoeuvre originally planned for August as the spacecraft was on track.
The Mars mission, under a 4.5 billion rupee (75 million U.S. dollars) project, was launched from Sriharikota in Andhra Pradesh, south India on board the Polar Satellite Launch Vehicle on Nov. 5 last year.
It is aiming to reach the red planet’s atmosphere by Sept. 24, 2014.